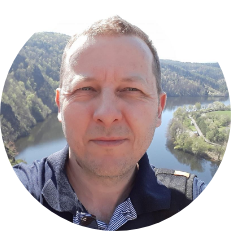 Petr Kouba studied philosophy at the Faculty of Arts of Charles University, where he continued his doctoral studies. During his doctoral studies, he studied at the University of Zurich (2000-2001), Duquesne University in Pittsburgh (2001-2002) and the University of Lausanne (2003-2004). After graduation, he lectured at Anglo-American College in Prague and as part of the CERGE-EI program at Charles University. In 2006 - 2016 he taught at the Institute of Philosophy and Religious Studies, Faculty of Arts, Charles University. He is the author of the book Phenomenon of Mental Disorder. Perspectives of Heidegger's thinking in the field of psychopathology (2006, 2012 published in German, 2015 in English) and Margins of Phenomenology (2016) and co-author of collective monographs Dynamic Structure. Language as an Open System (2007)Medicine in the Context of Western Thought (2008) and Franz Kafka: Minority Report (2010).